Vysotsk (Trångsund up to 1917; Uuras from 1917 to1948) was first mentioned in 1640 as a Swedish customs outpost. Over the centuries Trångsund harbor has historically been considered the exterior part of the port of Vyborg. Here, cargo from barges and small craft was loaded onto larger, seafaring ships with more precipitation. 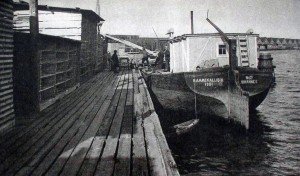 In the first quarter of the XX century Uuras turned into the largest timber port in Finland. The port was operative for nine months a year, from mid-April to mid-January. In summertime, up to two thousand vessels could be loading simultaneously in the harbor.

After being annexed to the Vyborg district of the Soviet Union in the early post-war years, the main export cargo of the outer harbor was apatite concentrate, arriving by rail from the Kola Peninsula.

In the early 60′s of the last century, port activities in Vysotsk were discontinued, but in 1980, the port was brought back to life. The railway was restored; new berths were built and equipped with powerful cranes brought from the Vyborg port. On December 21st, 1983 the first ship has docked at the Vysotsky port station. It was the steamer “Angarskels” that delivered a cargo of steel pipes from West Germany.

By the beginning of the 90’s Vysotsky port station has transformed into a major handling complex, capable of handling at their moorings vessels with deadweight of up to 25000 tons.

In February 1993, “Vysotsky Sea Commercial Port” Inc. was established on the groundwork of Vysotsky port station.

On January 5th, 1995 Vysotsk entered into the Register of Sea Ports of the Russian Federation and thus became independent, as well as one of the country’s youngest ports.

Since 2004, all cargo handling operations in the port are run by “Port Vysotsky.” stevedoring company. The port specializes in bulk cargoes. Currently, Vysotsk is handling Russian thermal coal transfers. 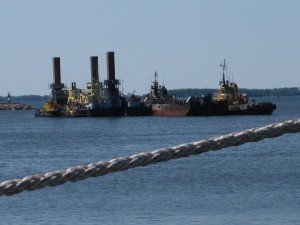 From 2008 to 2010, within the Federal Target Program of “Modernization of the Transport Systems of Russia (2002 – 2010)”, extensive reconstruction work has been carried out that included the renovation of the berths, the dredging area and the approach channel.

As a result of dredging the bottom, the mark has been increased from 10 to 12.7 m. Maximum draft of docking vessels has increased from 9.3 m to 11.9 m, this made it possible for  vessels with deadweight of more than 80000 tons to dock at the berths. 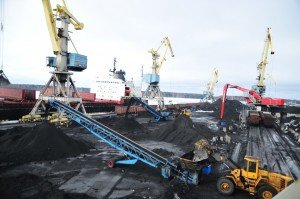 The main outcome of the joint effort of the government and business is the increase in production capacity of the coal terminal in Vysotsk to 5 million tons, and the creation of necessary conditions for the expansion of the supply geography for the coal transshipped, through increased capacity, modernization and improvement of quality of stevedoring services.